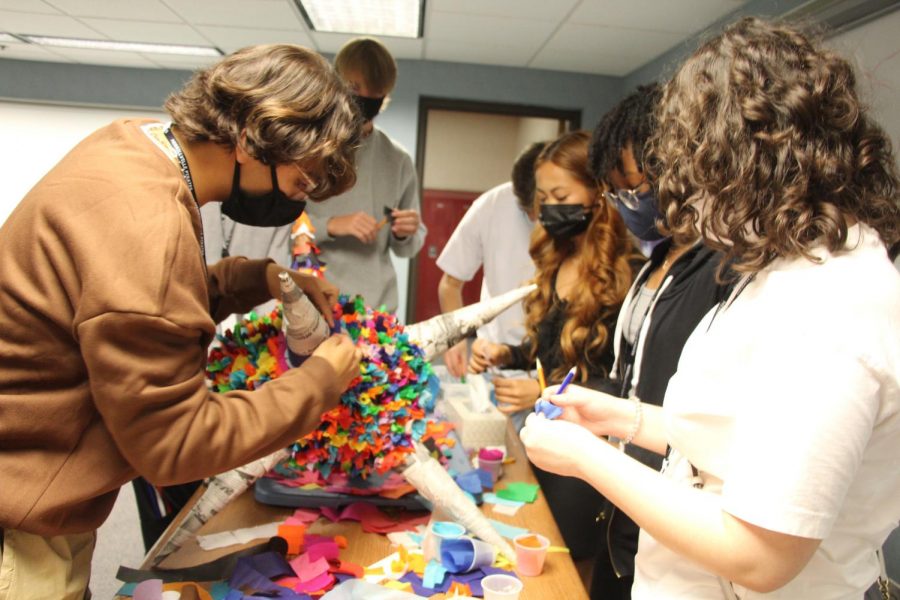 Students in Spanish Heritage class work on a pinata in honor of Hispanic Heritage Month.

Hispanic Heritage, starting September 15th all the way to October 15th, a time to celebrate the history, culture, and achievements that were made in history.The Spanish teachers and students are making sure to make it known.

Mexico is a big part of our continent and Latin American countries are close to the U.S., bringing many traditions of their cultures to America.

“Hispanic Heritage celebration encompasses everything about us: food, music, and how it can show other people and cultures how similar we actually are instead of being different,” Escobedo said.

In Mrs Escobedo’s classroom she has taught about famous people for Mexican independence, who started Hispanic Heritage, how it evolved, and who took part in evolving it. Each different class did an activity to commemorate Hispanic heritage.

Her second period class will be cooking food from the hispanic community such as rice, pico de gallo, and guacamole.

“[These are] easy quick things that you can potentially do at home for your family and show them,” Escobedo said.

Izavian Feliciano (12), a student in Mrs. Monica Gomez’s Spanish 4A class, is a firm believer in the education of hispanic heritage because of it’s personal importance to him as a Puerto Rican student.

“I think it’s important for people to learn about hispanic heritage to learn more culture in general, to stay informed,” Izavian said.

Gomez’s class is also taking part in the celebrations by making a lot of their decorations by hand to celebrate. One thing they made was pinata from scratch out of cardboard while having Spanish music playing.

To end the week on a good finish on Friday Mrs Gomez made hispanic food such as hueves, el carne, tacos, tamales, jello, and brownies.

Leila Castro took the position to lead her heritage class during their festives.

“Hispanic Heritage and history are just as important as any other community and culture,” Castro said.

Right now, they are in the process of decorating the school to show how they celebrate. So far they made Pinatas that are located in C hallway, a wall so people can take pictures, and filled a big case by the stairs with decorations.

“It’s a celebration about who we are and how far our family and our people have came,” Castro said.