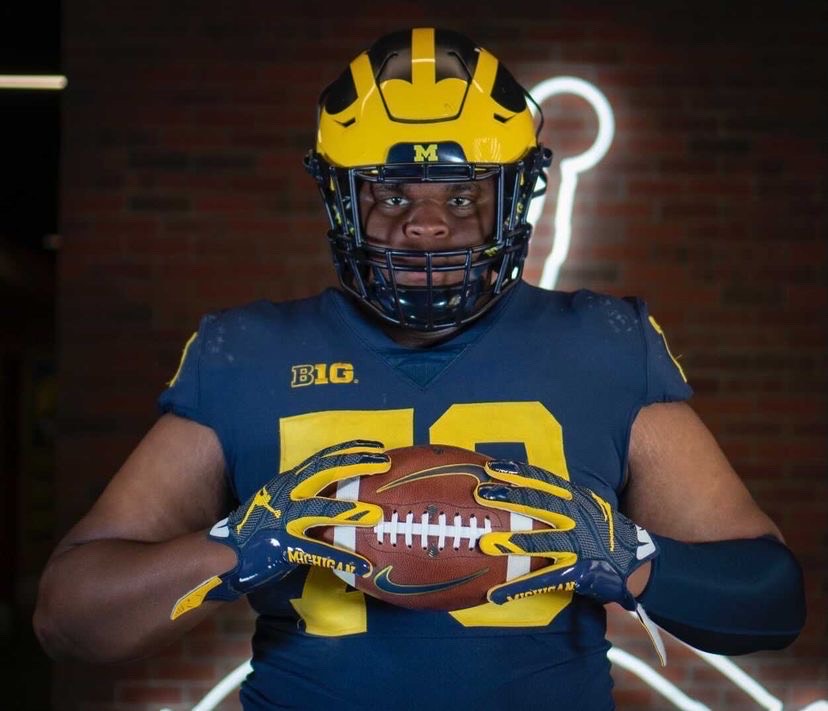 Senior tackle Kenneth Grant is so intimidating teams are running away from him.

“It seems like almost every team we play runs the ball away from me, so that gets kind of frustrating,” Grant said, “but I just have to trust my teammates to make the plays. But it’s hard because it’s my senior year.”

“It was about the end of my freshman year when I got my first offer, from Bowling Green,” Grant said. “It was actually the last trimester. We were about to get out of school for summer break for a couple of days. And then that’s when they called me in English class… and they offered me.”

Since then, he has put in significant work on the field in order to get him noticed by high-ranked Division 1 programs. He received offers from schools like Ohio State, Wisconsin, Purdue and more, but turned them down to play for Jim Harbaugh’s University of Michigan team.

“It was definitely stressful … traveling a lot, taking planes all over the country,” Grant said. “With school and football at the same time, it was kind of stressful.”

While Grant went on multiple college visits, none stuck out like the unique experience at the University of Michigan.

“They don’t talk about football that much,” Grant said. “They talk about what they could do for you for the next 40 years and the connections they have. They have so many Fortune 500 company owners up there. They would just hire you like that because you are a part of Michigan, so really that’s another reason why I chose Michigan.”

While having a great football program was important to Grant in his decision, he also was in search of a school that felt like home.

“It is similar to Merrillville,” Grant said. “It’s not too big, but it’s not too small at all. It’s really close, and there are a lot of people up there like me — goofy, silly, all that stuff. They’re not big-headed people or anything. They’re just cool.”

With all of the stress of the recruiting process and the opposing teams circling his name as the player to be stopped, he continues to find a way to go all out on the field.

“They definitely try their best, but I always try my best so they don’t make a highlight out of me,”

He is trying his best with a goal in mind… to play in the NFL.

“Yeah, that’s the plan,” Grant said. “But, injuries and stuff happen, so sometimes it doesn’t work out. That’s why I chose Michigan just in case. I’ll be set for life.”