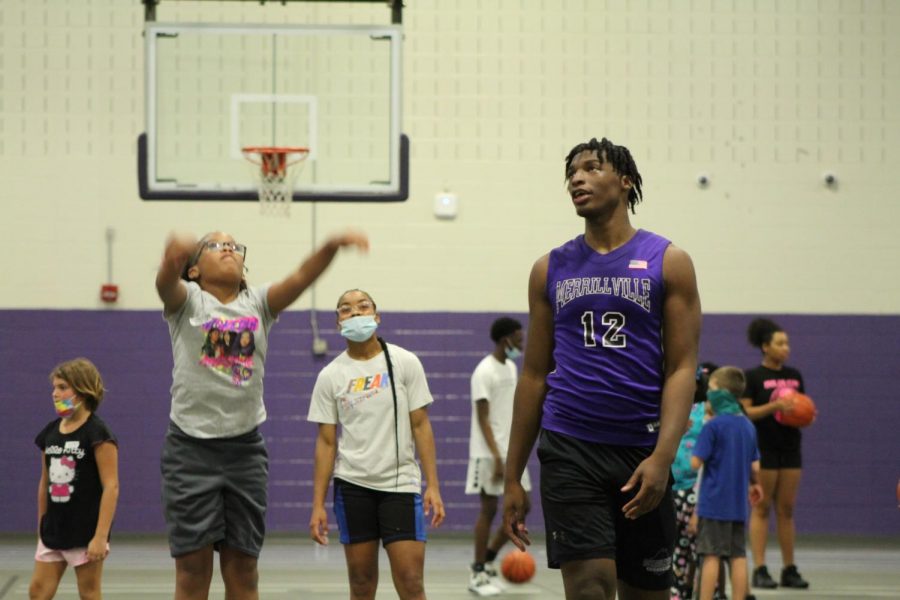 Deeon Franklin observes a young player put up a shot.

Slide, slide, slide! Is what you’ll hear at the boys’ basketball camp. The stressed and worried looks across varsity players’ faces. The sweat dripping down and a tired but ready look on younger players. Coaches walking back and forth checking that the drill is done correctly. Parents eagerly looking for the child in the crowd. Yelling, talking, and words of encouragement being given. Clapping when a drill is done correctly. Are all things that are seen at the Merrillville High School boys’ basketball camp training.

The temporary suspension of the Junior Pirates program has not stopped the boys’ basketball team and Head Coach Bo Patton from bringing their love of basketball and skills to the younger players. They have put in place basketball camps for different grade levels, which help younger players  learn leadership skills, athletic training, and one-on-one connections with varsity players.

“The camp will impact the next generation of athletes at Merrillville by, No. 1,  teaching them the fundamentals of basketball, so when they get to us they already have a solid foundation,” Patton said.  “No. 2, we just want the kids to have fun.”

The recent basketball camps have had a large turn out of many players coming out and supporting the training. Many of the athletes and basketball alumni have been enjoying themselves and learning new life skills, such as being a role model as they step into the role of coach at the camps.

“For my team I feel like it (being in the role of coach) could help me on the court and off the court showing energy and positivity,” Junior Louis Hunter said.

The camp allows the teens to step up and show they are not only a student athlete but are beneficial to the school. The younger athletes at Pierce middle school have even gained many skills that they are now able to use in school and among their team.

“I think once they see that (varsity members leading the drills) they envision themselves years down the road being that same person, being an athlete on the team, and being the one to instruct and lead drills in a camp,” head coach of boys’ basketball at Pierce Joey Traina said.

During the camp of course fun and hilarious moments happen between the players with times they’ll never forget. Growing the bond and impact in each other’s life.

“My favorite moment from interacting with the kids was when two kids came to the camp hype, with a lot of energy,” Junior Alec Cunningham said. “They were working hard the whole time then had fun and danced at the end.”