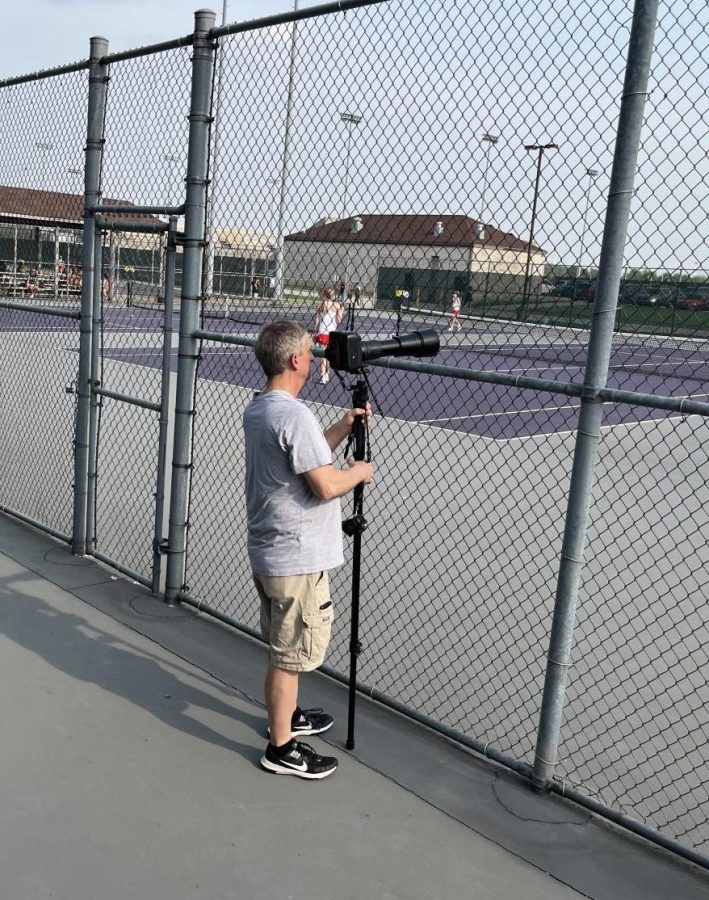 Photographer Tom DiGrispino is a fixture at MHS sporting events.

Whether you’re an athlete, club member, graduate, or just a student at Merrillville High School, you’re probably familiar with the name Tom DiGrispino AKA “Tom Dig.” Throughout the years, he has been Merrillville Athletic’s head photographer, and has made an impact on thousands of students and faculty in his time here.

DiGrispino first discovered his passion for photography at a young age.

“I always had some interest in photography and was dabbling in it after high school. I began photographing sports when my younger sisters were in high school, and I’d take pictures at their games,” he said. “I started photographing weddings and portraits, but it wasn’t until I took a trip out to Washington state in 1991 and photographed the most amazing scenery I had ever seen that I really caught the photography bug.”

Becoming Merrillville Athletic’s photographer was not exactly intentional for DiGrispino.

“About 15 years ago, my niece was running track for Merrillville High School and I had gone there to take pictures of her. As it turned out, I was sitting behind the mother of one of my niece’s teammates, and this woman happened to be the secretary to the Athletic Director at Pierce. She had mentioned they weren’t too satisfied with the person doing their sports pictures, and arranged for me to meet with the Athletic Director. He liked my work and my desire to do things a bit differently than what they were used to, so I got in doing their sports. For a few years I was only doing the middle school pictures, but when my nephew was a senior and playing baseball at the high school, they had nobody to take their pictures so I did it. That led to me doing the rest of the sports at the high school the next year.”

DiGrispino’s time spent with Merrillville High School has been the most memorable and enjoyable work he’s ever done.

“Initially when I first started doing sports pictures for Merrillville my plan was to try and get into other schools as well, but I’ve been cheering for Merrillville since long before I began taking pictures there, that my bias for the Pirates made me change my mind. I get to be a Merrillville fan and their photographer.”

Watching students grow has also expanded his love and appreciation for his work.

“There have been athletes I photographed at the middle school and all through their high school years who have become coaches at the high school,” DiGrispino said. “It reminds me how long I’ve been the photographer here and I hope that continues for a long time.”

DiGrispino has built many relationships with students, coaches, etc in his time photographing for MHS.

“The relationships I’ve built with all the people at Merrillville have influenced me to try to do all of my work on a more personal level, it makes things more fun getting to know the athletes, coaches… and I think it makes things more efficient. It seems like people are much more comfortable being photographed by someone they know.

“Getting to know the athletes from middle school all the way through high school has made it easier and more fun for me. Especially photographing the prom, when I get to take pictures of the athletes all dressed up and looking their best.”

Senior athlete Azariah Crosby feels grateful to have Tom Dig as a part of her athletic career.

“When he’s at meets, games, and matches he always makes sure to check in on us and make sure we’re doing okay,” Crosby said. “He is very reasonable, flexible, and considerate when it comes to taking our pictures. He makes sure we like them, and if we don’t he does his best to ensure we figure something out.”

DiGrispino’s relationships with the teams brings fun and enjoyment to his work.

“I was recently at a baseball game and before the game, the guys struck a pose and had me take their picture, this sort of thing happens often at all sporting events at Merrillville, and it’s one of the things that makes the job so much fun, but I doubt it would happen if photography was strictly business for me. It’s a result of keeping it on a personal level and trying to get to know as many of the athletes as possible. Doing things this way has also created great working relationships with the coaches and administrators too.”

His work with MHS has created many significant memories that he has cherished throughout his career.

“Perhaps my favorite memory is when I had first started taking pictures for Pierce Middle School and my nephew was playing for the football team there,” DiGrispino said. I was taking pictures at one of the games and was in position to get a picture as he caught his first touchdown pass for Merrillville.”

Students have also experienced many memorable moments through DiGrispino’s work.

“My favorite memory about Tom would have to be in 8th grade during basketball season when Davina [Smith] tore her MCL and had to wear a brace,” Crosby said. “It was picture day, and he made sure Davina was pictured, so he had to photoshop someone else’s legs onto hers.”

DiGrispino’s childhood love for football has carried on throughout his photography career.

All of the sports are a lot of fun to photograph for DiGrispino but, there are definitely some that are more challenging than the others.

“The hardest sport to photograph in terms of getting action shots is swimming, often the swimmer doesn’t take their head out of the water and a lot of times when they do, the splashing of the water obscures their face. Usually when I do a swim meet, I end up deleting more than half of the pictures because the swimmer’s face can’t be seen. The shorter the distance the race is, the more difficult it can be to photograph.”

Outside of school and sports, he has found passion in capturing nature in his photography.

“I’ve taken several hiking trips out west just to see and photograph the mountains, and even though there are no mountains around here, I sometimes walk through the forest preserves to take pictures.”

Regarding professional work, he also provides other unique services.

“Besides sports, I photograph family and individual portraits,” DiGrispino said. “I have photographed weddings but haven’t done many in recent years with the exception of my niece’s wedding last year. One thing I wish there was more of a call for is restoring old photos. I have a lot of old faded and damaged photos of my parents, grandparents, and even great-grandparents that I’ve restored over the years.”

Merrillville High School is greatly appreciative for Digrispino and his work.

“Every school needs a Tom Dig,” Crosby said. “I’m so happy to have known him for so long.”