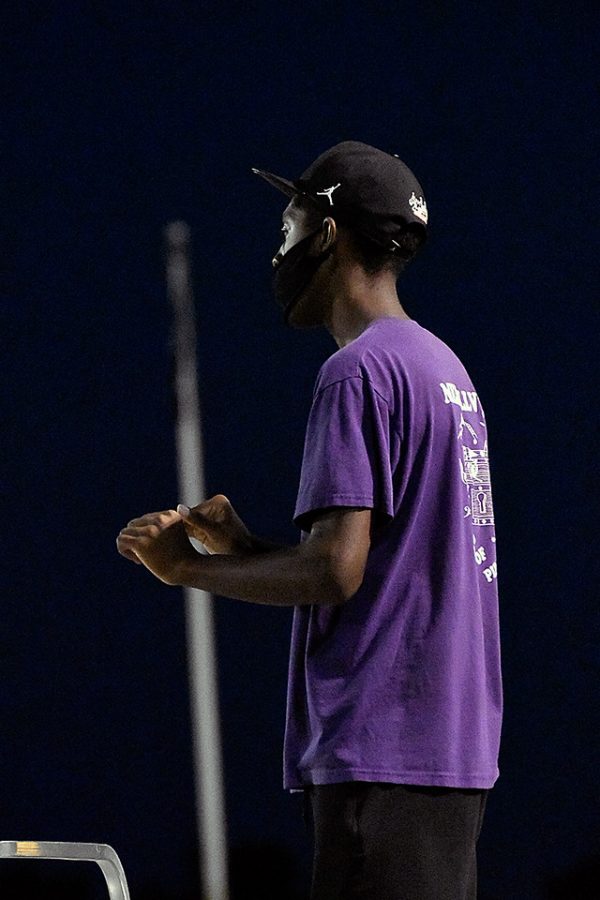 “And there is deep down within all of us an instinct. It’s a kind of drum major instinct — a desire to be out front, a desire to lead the parade, a desire to be first. And it is something that runs the whole gamut of life.”
Those words, spoken by Martin Luther King Jr, describe the longings he believes live inside us all.
These aspirations are a personal truth for drum majors Elijah Walker (12), Darius Lewis (12) and Joseph Sleweon (11).
Music was an early love for all three drum majors, who started in playing in 6th grade and worked their way up to the top.
“I first chose to play clarinet, fell in love, switched to bassoon out of boredom, fell in love again, and the rest is history,” Walker said.
For Lewis, the path to leadership was born out of admiration and immersing himself into the band kid culture.
“Watching my drum majors my freshman year captivated me,” Lewis said. “I was completely immersed in the world of marching band leadership. From then on, I would hang around the drum majors, ask them an annoying amount of questions, and practice my marching, conducting, and commands for my audition in the spring. I guess it was convincing enough because I became a drum major in the fall of the next year.”
Due to COVID-19, many students had to decide whether or not they would participate in extracurricular activities, such as marching band. This decision was one Sleweon carefully considered.
“This season with COVID going on I faced a really tough challenge, and it was almost having to give up my spot as drum major because I was very concerned about the pandemic and didn’t want myself or my family to get it.” he said.
“I went ahead and made the decision to continue my job as a drum major, making sure to wear my mask and properly socially distance.”
The band was still able to continue their season, even though they had to adjust to having fewer students involved.
“Some challenges this year were not having the entire band, practicing in small groups, and not having the sound we used to before COVID-19. I got through it by accepting that this is what we have to do to still have some type of season,” Lewis said.
To the drum majors, being in band is about more than just making music; it is about making memories.
“It’s the friendships and bonds that I’ve made with some incredible people that outshines every other opportunity that being in band has given me,” Walker said. “You make friends for life. Even when they graduate, you continue to talk and check up on them because of the bond you created with them while they were here.”
“Band has helped me to love and appreciate music more than I ever have before while allowing me to make a lot of great friends along the way. When you’ve been with the same people for five years you kinda start to become like a family,” Sleweon said.