Some spook-tacular fun for Halloween 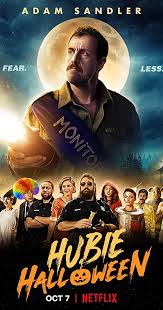 In October, many people start to decorate their homes and ready for Halloween, and they start to get costumes ready for parties and trick or treating. Since we may have to stay in this year for Halloween, here are some shows and movies available on Netflix that are good for Halloween.

In Hubie Halloween, Adam Sandler stars as Hubie Dubois, a good natured, devoted volunteer in Salem Massachusetts, who strives to ensure the safety of his town every Halloween and finds himself in the middle of a real murder investigation.

The Haunting of Bly Manor is a “perfectly splendid” show based in England during the 1980’s and tells a story about a young woman hired to take care of a man’s niece and nephew in their large manor, and while she’s there, odd things begin to occur.

In Vampires vs. The Bronx, a group of teenagers are forced to protect their neighborhood when a gathering of vampires invade.

In A Babysitter’s Guide to Monster Hunting, Kelly finds herself in a secret society of babysitters, battling the Boogeyman when he and his little monsters snatch the boys she’s babysitting on Halloween.

In Paranorman, an odd boy who can talk to the dead is left to save day when zombies invade his small town.

In The Witches, a boy goes on vacation with his grandmother and they stay in a hotel that hosts an international witch convention, and the witches come up with an evil plan.

In Goosebumps 2: Haunted Halloween, two best friends, Sonny and Sam meet Slappy, a sneaky talking dummy from a unpublished Goosebumps book. Slappy kidnaps Sonny’s mother and brings all of his his friends back to life in the hopes of starting hi own family, leaving it up to Sonny, his sister, Sam and a neighbor to save Sonny’s mom.

In The Boy Who Cried Werewolf, David and his son Hunter, and his daughter Jordan move to Romania after their long lost relative wills them his mansion. While they are looking at the house and getting ready to sell it, Jordan becomes a werewolf and Hunter tries to save her.

Hopefully, these movies will make spending Halloween inside a little more enjoyable for everyone.