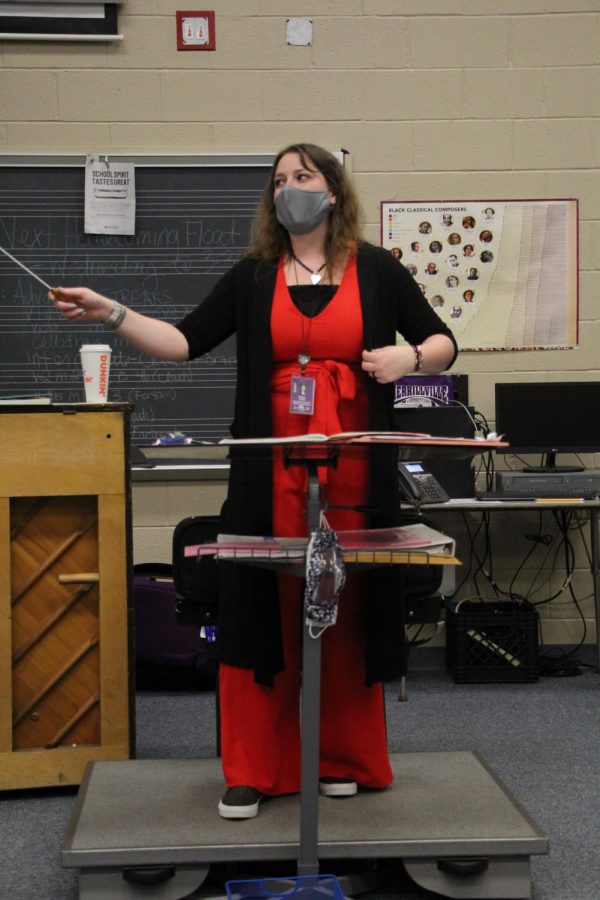 After Mrs Rosenthal retired, the school was on the hunt for a new Orchestra Director, and they found Ms. Jillian Mallory.

She explained that in past years she taught elementary students so this time she is teaching kids that were more invested in playing music. In high school, she took a music theory class, led by her orchestra director. It was his first time teaching that kind of class in a while, so they would help each other out. When explaining something in class, she realized that her passion for music was becoming a goal for her career.

Mallory wanted to bring a love for music to younger students and show them not all music teachers are bad.

“I wanted them to really appreciate the fun that music can be,” she said.

Mallory believes that music education is valuable for students and schools. It allows outlets of stress and an opportunity to build a community that they might not otherwise have a chance to do.

“Music is one of the only subjects that triggers all parts of the brain at one time,” she said.

Mallory believes that life without music would be pretty boring, and if we don’t have music as a class to take throughout our schools students wouldn’t necessarily be exposed to it in a way that streaming music cannot do.

The moment when a student finally plays a part correctly that they have been struggling with is a moment Mallory has to name as one of her favorites. When her and her orchestra break down a piece, practice it over and over, and then they come to play it as a whole, it brings a feeling of accomplishment to her and her students.

“Everyone gets a rush of confidence and pride, it’s truly amazing,” Mallory said.