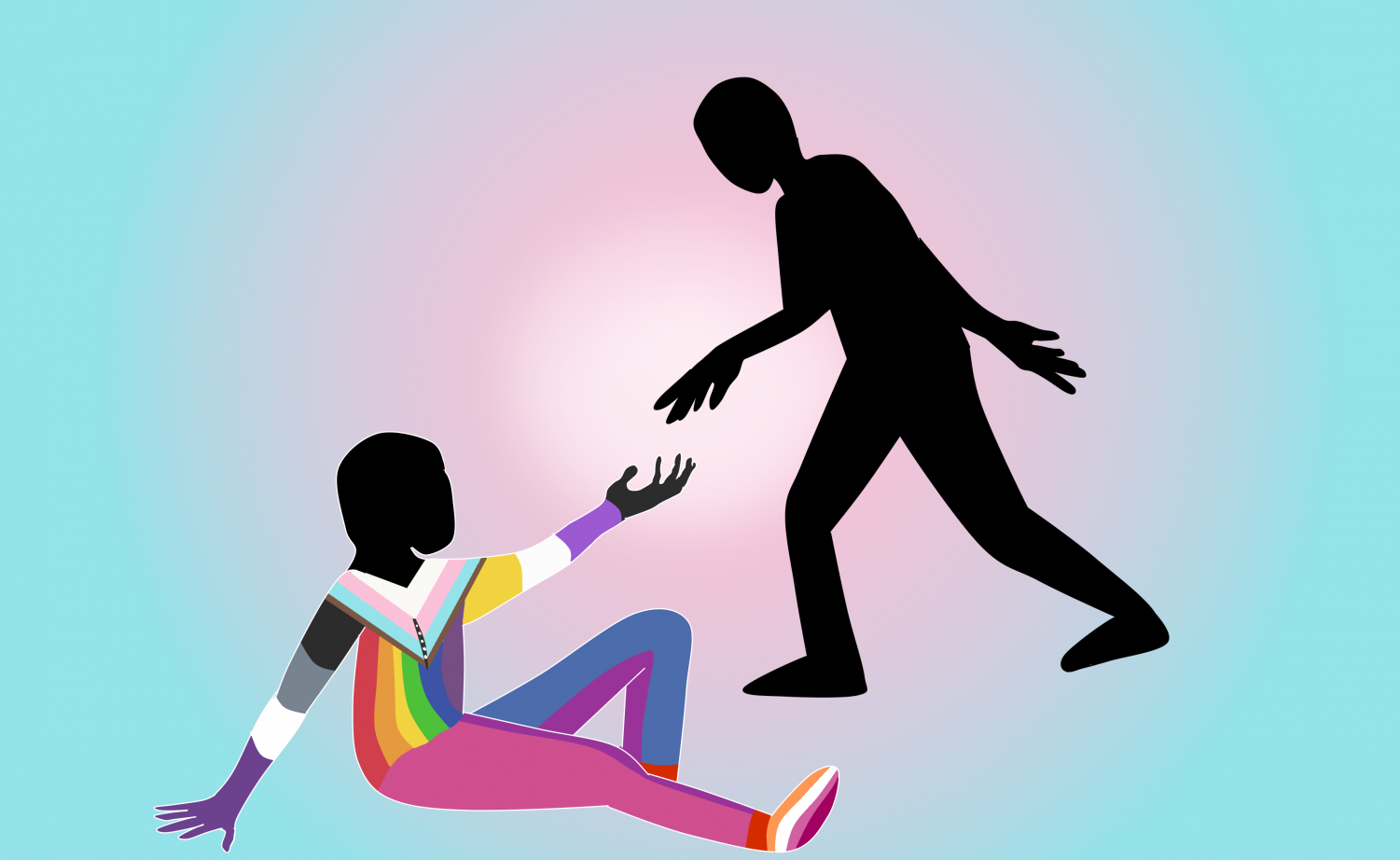 The trials and tribulations of embracing one’s identity

“Being who you are is the most freeing feeling in the world.”

In the years of high school, kids start transitioning into young adults, and are thrown into the chaos of the real world. We are presented with some of the most confusing but assuring questions in the journey of discovering the things that make us who we are: What are my interests? What makes me happy? What do I believe? Who am I?

Coming to understand and accept where you fit and who you are is rewarding, but comes with its challenges.  For two MHS students, Jaiden and Sara (whose names have been changed for this article to protect their identities) have experienced both the beautiful and grim realities that come with falling into the LGBTQ spectrum.

Jaiden (he/his) identifies as transgender (female to male) and gay, meaning that he is attracted to men.

Like many LGBTQ youth, Jaiden first started questioning his gender back in middle school, and has come to embrace it in his years of growth.

“I’ve known that I was transgender since 6th grade, but I didn’t actually start socially transitioning until I was a freshman in high school … it was a gradual process, just slowly learning about myself,” Jaiden said.

After finally becoming comfortable with himself and feeling sure of his discovered identity, he was ready to share who he was with the world. Unfortunately, those around him sometimes struggled to understand and accept these changes.

“I originally came out to my parents when I was in middle school, and they basically told me ‘no you’re not’ … so then I waited until freshman year to tell them again that I was seriously trans and that it wasn’t going to go away, and they finally listened to me,” Jaiden said.

The phrase “it sucked” was constantly used in Jaiden’s descriptions and feelings of defeat in his parent’s denial. Thankfully, the second time around, they were more supportive and compassionate.

While he says most of his peers and teachers are accepting, he has also been the victim of microaggressions and pure disrespect from those unwilling to try to understand.

“I’ve had a negative experience with a teacher who purposely would call me by my dead name during class, even though he knew I go by [Jaiden], which really sucked, and was upsetting for me,” Jaiden said.

“People make offhand comments about me a lot, but I just try not to let it bother me because it’s clear that they’re insecure about something if it means they need to make fun of me to feel better about themselves,” he said.

One of the greatest misconceptions about LGBTQ youth, Jaiden says, is that being transgender is “just a phase” or something people do to “be cool.” However, this simply is just not the case.

“I feel like a lot of people think LGBTQ people ‘do it for attention’, especially transgender people, which is completely not true,” Jaiden said. “That argument is just ridiculous, because if I could not be trans … I would much rather not be trans because of some of the things I’ve had to go through.”

Jaiden has continued to flourish and feel secure with himself despite the backlash. He believes that the journey has made him a stronger and better person.

“I’m a lot more confident in myself now,” he said. “I used to be super insecure, but once I became more comfortable in my own skin and accepting of my identity, I’m much more self-assured and happy with who I am.”

Sara (she/her) identifies as transgender (male to female) and in-between bisexual and pansexual, meaning that specific gender or sex doesn’t limit her attraction to a certain person.

Sara began exploring her sexual identity back in middle school, further embraced herself through her early teen years, and in the process made connections back to things she remembers growing up.

“I knew I was transgender my freshman year, when I really started to question my gender,” Sara said. “A lot of things started to slowly make sense about my childhood and my preferences for things.”

Though Sara was comfortable with herself by the time she was ready to come-out, she was unsure of how her family and friends would react to the news, and prepared for the worst.

“I was terrified,” Sara said. “I come from a conservative family, so up until I was about 8, I thought being gay or lesbian was like a crime because of the things I heard on the TV or bad things they would say about LGBTQ people.”

“I have an aunt who is gay too, and my family kind of disowned her. We don’t talk to her, we don’t talk about her… and she’s not exactly the best role model for me to go to about myself, so that didn’t really help my case either.”

While Sara did receive backlash from some of her family members, especially her dad and grandfather, her mom’s support was unconditional, and she continues to defend Sara to anyone who has any negative thoughts or feelings about who she is.

“One time, I posted a picture on Facebook of me as female and my own grandfather felt the need to write a paragraph to me telling me how I shouldn’t be acting like a ‘professional’… which the only things I have come up with that he could have meant are professional drag queen or a prostitute,” Sara said.

These kinds of remarks can be defeating, and destroy the self-esteem of young people who are already putting themselves in such vulnerable positions by sharing their feelings and discoveries.

“Even yesterday, I went to the bank. They didn’t believe that I was who I said I was. It took forever, and they were scrutinizing my ID trying to insinuate that I was lying,” Sara said.

According to a 2016 study, 1 in 4 LGBTQ people reported experiences discrimination because of their gender or sexual identities, and the numbers have only gone up from there.

“It’s hard. You can’t show these emotions, because you have to be strong. But to have a stranger in your face basically saying ‘I don’t believe you’… it’s a whole different feeling I can’t even describe.”

Sara recalls both positive and negative experiences in her school environment, but believes the good has tremendously outweighed the ugly.

“There are a few teachers who are against it, and they will vocalize that, but they will respect you because they have to,” Sara said. “And then there are teachers who are absolutely phenomenal, like Mrs. Oestrich, who goes above and beyond to help anyone… she will pull you aside, she will provide you with a safe space if you need it. Mrs. Tubbs is the same way, and there are a bunch more that are, too.”

Sara believes that hatred from outsiders is rooted in false beliefs that being LGBTQ is a choice, and forces people to see those who identify out of the “normal” roles of sexuality and gender as invalid.

“It’s not a choice,” Sara said. “Who would choose to be judged and discriminated against for the rest of their life? There’s so many misconceptions, like for bisexual people, for example. Yes it is possible and no we’re not going to cheat on you.”

Sara ignores the hatred and resentment from those who don’t understand, and continues to live her true, authentic self as an LGBTQ woman.

“Being who you are is the most freeing feeling in the world,” she said. “It’s hard because people don’t accept it, people don’t believe it, people are crazy. Before I came out, I really had to consider the consequences of doing so. But for me, I felt the positives of coming-out would outweigh those negative consequences, so I did it and never turned back.”

At our own school and  schools across the globe, there are thousands of students like Jaiden and Sara who often need guidance and support through their journeys of discovery. According to a 2017 study from the Human Rights Campaign Foundation , 60% of LGBTQ youth reported struggling with mental illnesses including depression and anxiety due to the struggles they were facing in coming-out or even just accepting who they are.

“I think it’s so very beneficial for LGBTQ+ students to have this outlet in the GSA,” Club Sponsor Ms. Stamatina Kalafatis said. “Especially considering not all students can be out publicly, this can be a space where they can be themselves, feel safe, and not have to worry about being judged by anyone.”

“It takes time and support and effort to make positive change, so having this space in the GSA where students can be themselves and meet others in the community as well as allies will hopefully help them feel more at home and more like they are seen and heard,” Ms. Kalafatis said.

“Sometimes it’s as easy as having peers around and that will help a student to open up and bloom so they can properly feel like themselves when they come to school, and also as they go through their daily lives at home.”