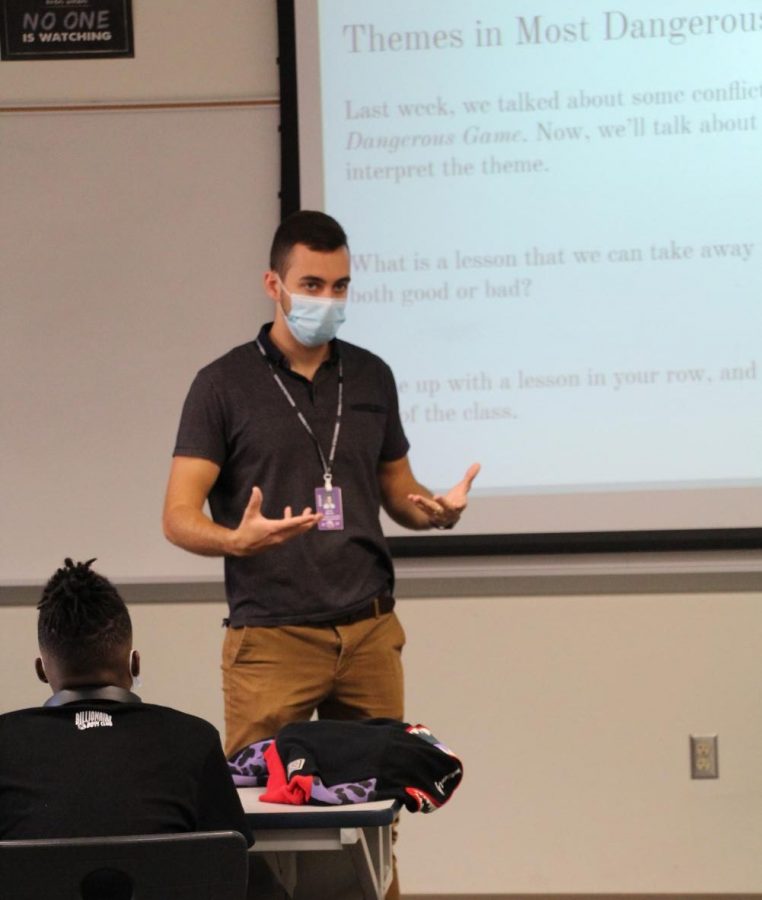 Q: What piece of advice/life token would you give someone entering their 20’s based off of what has happened to you in your life?
A: ”Learn to embrace failure as an opportunity to learn and don’t tear yourself down just because you didn’t succeed. Like there’s a saying that I really like that says you’re either going to win or learn, so learning to view that as not doing well on something isn’t always a bad thing. So shifting your mindset to that I think it was important for me.”

Q: How and why did you choose to pursue a career in education and decide that college was the best option for you?
A:”College was always something that I was going to do. I guess it was kind of expected of me, but then when I got to college I originally wanted to be a doctor because that’s what my dad does and I liked science. I was good at it. I liked helping people, so I was like yeah that sounds fine. But then when I got to college the very first class we took was general chemistry and it was hard; I put so much time into it and I didn’t pass it. So it was an opportunity for me to learn there and it forced me to realize I didn’t have the internal motivation to put in the time to succeed in that. So it made me realize that being a doctor wasn’t something that I hadn’t seriously wanted to do it was just like oh I guess I could. So after I failed chemistry and realized that I didn’t really want to be a doctor I just kind of, I just wondered and just took my gen eds trying to buy some time to figure out what I wanted to do. And then I took world literature at the end of my sophomore year and I absolutely loved it, I loved the books we read, I loved the discussion, I loved putting yourself into it and talking about it, and taking these old stories and still talking about how they were applicable today; I loved every second of it and was like yeah I can do this, so I ended up here.”

Q: So were you confident that when you first made the decision to pursue education that it would be a career you enjoyed?
A: ”Yeah, pretty much as soon as I realized that I wanted to do it like from the very first class I took I knew it was right.”

Q: What challenges involving love, career, and day to day life do you feel like are the hardest to overcome and why?
A: ”I think just in all of those in love, in your career, and in whatever having self-awareness to know when you did something wrong and the ability to admit that and own up to it is really hard. Because in a relationship you want to imagine that you’re going to be the best person you can be, so if your partner is unhappy then it’s like; oh you’re just having a bad day, your taking it out on me and there’s a bit of humility that you need to have like oh yeah I actually did mess up I’m sorry. And saying sorry is really hard so just that self-awareness to step back and acknowledge that you did something wrong. Same thing with a career as a teacher I want to try to be the best teacher I can be, and so when I do something and realize oh I should’ve done that better it stings a little bit because it’s like I did that wrong. But then owning up to it and being like okay well i did that wrong and now I have to do it again we’re going to change going forward. So it’s just self-awareness and humility to admit when you do something wrong and then fix it.”

Q: What is something that you wish you would’ve known before entering your 20’s?
A: ”Start investing money. Even if I just had $50 and invested it in some safe predictable fund and just did $50 or $100 a month by now I would have had plenty and could pay off student debt or pay a good chunk of my house or whatever. It’s just something I never thought about.”

Q: If you could do it all again would you do anything differently and if so what would it be?
A: ”Nope, because everything that I did led me to exactly where I am. I love my job, my wife is awesome, I have great friends, I kind of don’t really need any more than that.”

Q: Are you happy with where you are currently at and do you always plan on staying in this career?
A: ”Yep, absolutely I think Merriville is fantastic and some form of it or another.

Q: For high school graduates that are choosing to go to college what advice would you give them?
A: ”Think carefully before you commit to college because if you’re just going because somebody told you to or just going for the sake of earning money that’s not always the best decision because college is expensive. If you just want to make money and work trades or lucrative. One of my friends is becoming an elevator worker for a union in Chicago and he’s going to be making like 6 figures in three years. So if you want to make money do that make sure that college is actually something you want to do because I saw a bunch of friends leave and now they have debt for something they didn’t even finish. Make sure you want to do it for you.”